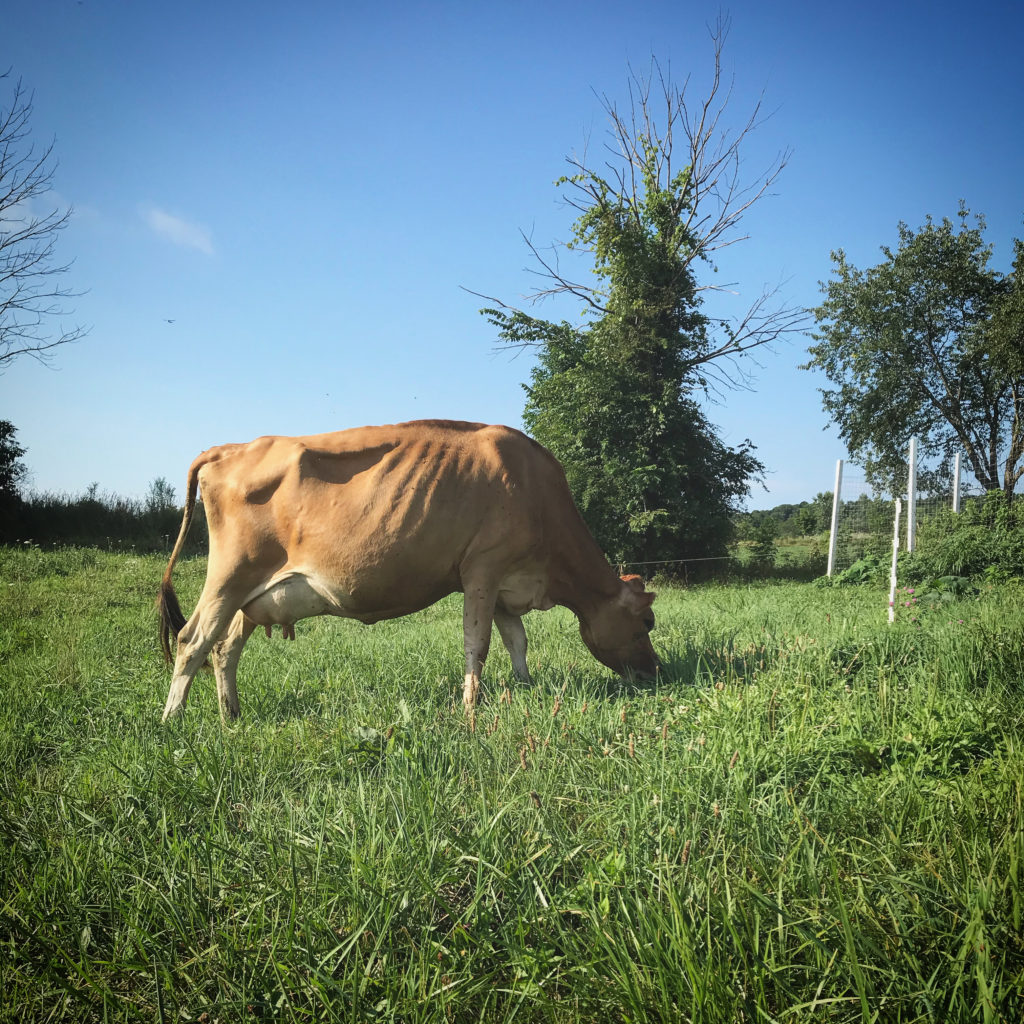 In order for your milk cow to produce milk, she must have a calf. And in order to have a calf, she needs to be bred.  The simplest way to do this is to have a bull handy, but that’s not always possible or feasible for a small family farm or homestead. Artificially inseminating your cow (either right on the farm or at the veterinarian) is a good option and ensures an accurate due date. But either way, you need to know for sure when your cow is in heat and ready to be bred.

A cow will come in heat 30-90 days after calving and then every 18-21 days after that. Every cow is a little different, so you’ll need to watch her closely for signs of coming into heat for several days around that schedule.

“In heat” means she is ovulating – fertile and ready to be bred. “Standing heat” refers to the 18-24 hours that she will willingly stand for a bull and accept breeding. Those are her most fertile hours and whether you’re doing a live cover (breeding with a bull) or AI (artificial insemination), you want to be sure to time the breeding just right.

How do you know when she’s in heat?

The most obvious sign is mounting other cows. When in heat, she will jump up on and ride another animal. This does happen with some regularity within a herd, even when they’re not in heat, but if she is consistently mounting or being mounted by another animal, and especially if she stands still while another mounts her, this is a clear sign of heat.

Sometimes a cow will even want to jump on you. When our yearling heifer is in heat, she often wants to jump on me; I watch her closely and try to keep from turning my back to her to keep her from doing so.

Another obvious sign of heat is mooing. Depending on your cow and her personality, insistent and consistent bellowing is another sign of heat. Our cow Sandy rarely moos. If she does, it’s for an obvious reason (e.g. we’ve just separated her calf). But she moos much more often when she’s in heat (sometimes it almost sounds like she’s in distress – but it’s just hormones). Our yearling heifer, on the other hand, bellows like it’s going out of style for several hours at a time. I can always tell when it’s “her time of the month” by her bellowing alone.

Discharge is another sure sign to look for. As her body ovulates and prepares for breeding, her vaginal canal will produce discharge to ease the breeding process. You’ll see long strings of mucus from her vulva, often swooped up on her flank by her tail. This is an excellent sign and a good rule of thumb is to breed 12 hours after seeing discharge – so if you observe it in the morning, breed in the evening.  If you see it in the evening, breed the next morning.

Other signs include restlessness, general irritability, rubbing on another cow, on trees or fences, or on you, and a swollen vulva.

The best way to know if your cow is in heat is to carefully observe her behavior and combine both the timing of previous cycles (18-21 days) and several of the previous signs.

What if there are no other cows around?

I am asked this question a lot. Because the most obvious signs of heat are mounting and mooing, if there are no other animals for her to interact with, it can be difficult to detect heat. The best way to do so is careful, consistent observation and accurate timing.

For example, our milk cow Sandy calved on February 15th. She came into heat for the first time on May 19th, exhibiting very clear signs: she had been irritable for several days beforehand (she balked when I tried to lead her, was sometimes restless and shifted more than usual during milking, and even laid down one morning when I tried to bring her up to the barn); she tried to mount both the steer she was with and her calf; she was mooing more than usual; and she had clear discharge swung up onto her flanks.

Knowing for sure that she had been in heat on May 19th, her next cycle would have been around June 9th. This was earlier than I wanted to breed her so I didn’t pay close attention.

The next cycle after that should have been June 30th. I watched her closely the day before, day of, and day after and though her vulva was very swollen and she did moo some, there was no discharge. Since the steer was no longer with us, I just wasn’t 100% sure. Without the steer around, she did not mount the calf and didn’t seem to exhibit many of those sure signs of heat.

Because I wasn’t totally sure when/if she was in heat, we missed the chance to breed her. But when the time came for her next cycle on July 21st, I had a better idea of what to look for with her specifically (and specifically without another animal). She was more restless than usual. She rubbed up against her calf and against the trees in the pasture. She was swollen and mooing (not a lot, but more than usual for her).

Having previously observed her behavior closely, when I saw these signs on the 21st, and knowing the timing was right relative to her previous cycles, we decided to breed her via AI on the morning of the 22nd, just after milking. Our friend is an AI tech and brought his equipment to artificially inseminate her. Once he was inside and could feel the condition of her cervix (which softens and elongates when she’s in heat in preparation for breeding), it was clear that though we were on the early side of her cycle, it was still good timing for breeding.

We’ll watch her closely around August 11th (the timing for her next cycle) and hope that she does not exhibit any signs of heat. This will mean that the breeding took and she’ll have a calf in mid-April.

Because they are lactating and much of their energy goes to producing milk, the conception rate for dairy cows is around 44%, so if she does come back into heat, we’ll simply try again.

The three most obvious signs of heat are mounting, mooing, and discharge. But also watch for restlessness, irritability, rubbing, and swelling of the vulva. Combine those signs with careful observation and timing of her cycle (18-21 days) and you can be confident in identifying the signs of heat in your family milk cow and get her bred so she gives you a lively spritely calf next year and keeps on producing that liquid gold.

Have any other questions about identifying heat in your cow? Let me know in the comments below!