You are here: Home / Blog Post / The Milking Routine

You’ve got the cow. And a good place for her to live. And good feed. And a milking set up. Now you’re ready to milk.

No matter if we’re talking weeding the garden, or stocking the pantry, or decorating a room, I love to see how others do things. In that spirit, let me walk you through my milking routine:

In the house before I go out to milk, I’ll prep a wash bucket with clean water (warm in winter, cool in summer). I’ll gather two rags (one for washing, one for drying), the bag balm, any other ointment I might need, and the milk pail (and lid). I’ll drop those things off at the barn, collect the halter and rope, and go get the cow.

Once I bring her back to the barn, I’ll tie her up securely and brush her down, starting at her head and working my way to her tail end, paying special attention to her rump, flanks, rear legs, and upper udder (where it’s hairy). I do this because she likes it, it’s good for her coat, and it’s good bonding time. But if I’m in a hurry, it’s her rear half I’m particularly concerned about – a brushing will remove any loose hairs so they don’t fall in the milk pail later on.

After brushing, I’ll wash her udder using the wash water and the rag I brought from the house.  If she’s lain in mud or manure, this washing will be thorough. And I might need to go back to the house for a fresh pail of water. If she’s relatively clean, a good rub down will be sufficient. I pay special attention to the very end of the teat and I’ll rinse the rag in the wash water between quarters.

At this point, many will insist that you use a teat dip. An iodine-based teat dip will effectively and efficiently kill any bacteria on the teat. You’ll need both the teat dip liquid and a special dip cup. You pour the liquid into the cup and add the lid. You squeeze the cup which dispenses the liquid into the lid, then dip each teat into the liquid in the lid, holding the teat in the dip for about 10 seconds. After dipping each teat, you let the liquid sit for about a minute and then rub it off thoroughly and completely. I have a teat dip and I’ve used it, particularly after washing an udder caked in mud or manure. I keep it in the barn in case I need it, but I’m inclined to let wash water be sufficient.

Washing complete, I’ll grab my milk stool and the second rag, have a seat, and dry and massage each quarter and teat. I start with the two farthest teats, spreading the towel between both hands, and rubbing one quarter/teat with each hand. This not only dries her udder and teats from the wash water (this is important to prevent chafing – any moisture between the teat and your hand as you milk can chafe uncomfortably), but prompts her to let down her milk. When the calf nurses, he’ll butt her udder with his head. It’s not gentle, but it is instinctual and prompts the cow’s let-down. Your massage should be firm, but you can still be gentle. I always leave the drying rag laid over my leg as I milk, just in case I need it again (sometimes milk will squirt on my fingers and I’ll need to wipe it off, for example).

Next, I’ll milk two to three squirts from each teat. This expels any bacteria that may have entered the teat canal and is also a good chance to look for signs of infection. You can squirt these first squirts on the ground or on the toe of your boot (this will let you see if the milk is lumpy or stringy – signs of mastitis). You can also use a strip cup to catch those first squirts. A strip cup is a stainless steel cup with a mesh lid. The mesh will catch and display any lumps or strings from infected milk; the cup saves those few squirts and you can pour it into the cats’ dish later.

Now I’m ready to milk. I use a stainless steel light-duty pail. I like to start with the two teats farthest from me and milk in a right-left-right-left rhythm. It’ll be slow-going at first. Remind yourself over and over that it takes about two weeks to feel comfortable and about a month to feel proficient as a hand-milker. It’s a skill and it takes practice. Your hand might cramp. Shake it out and keep trying. Your wrist might get sore. Take a break, do some stretches, and come at it again. Like any muscle building, you’ll be sore at first but your body will adapt and you’ll get stronger.

The first few squirts will be slow, but as the cow lets down, those teats will fill firmly between each squirt. It takes me between 10-15 minutes to milk out each side. Once the far side is milked out, I’ll start on the near side. And as I finish the near side, the milk stream will abate until it’s just a trickle with each squirt and then no more than a few drops. I’ll alternate between all four teats until I can’t get any more milk. You’ll want to be sure she is fully milked out – milk left in her udder makes her susceptible to mastitis (infection within the udder). 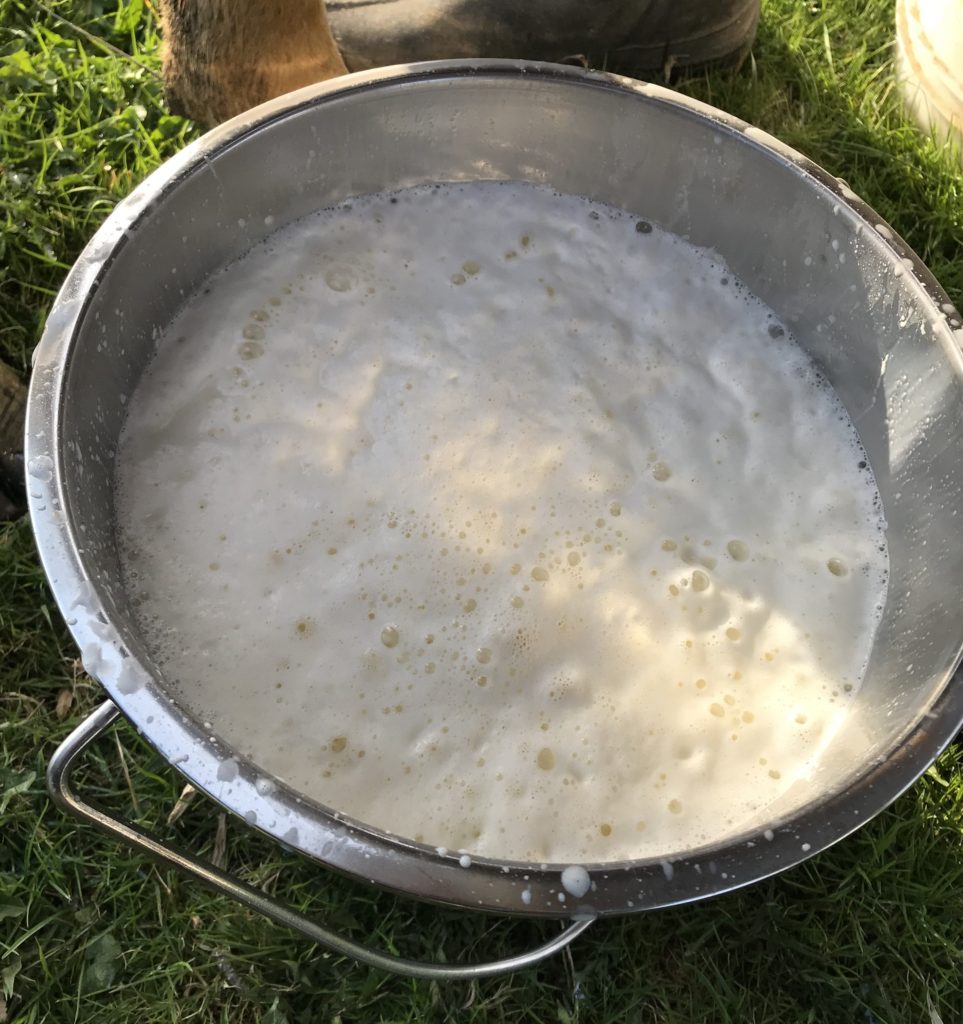 When I’m done milking, I’ll set the milk pail aside (mine goes on a ledge in the barn where the dog/cat can’t get to it) and cover it with the lid (or a clean towel) to keep out any dirt or debris. Then I’ll scoop out a dollop of Bag Balm (maybe the size of a grape) and rub down each teat. I like the keep the bag balm in my pocket as a milk – my body heat warms it just enough so that it’s nice and smooth when I dip into it. When Sandy’s teats were injured (rubbed raw and bleeding from her calf’s teeth), an experienced dairywoman friend told me not to hesitate to use whatever lotion or salve I would use on my own hands if they were chapped and bleeding. So if the situation calls for it, I use Working Hands. Whatever you use, you want to keep her teats soft and flexible – for her comfort and for yours (it’s much easier to milk soft healthy, teats than dry, hard, chapped ones).

And that’s it. I’ll return the cow to her paddock, make sure she’s got good clean water to drink – a cow is thirstiest right after milking, love on her just a bit, and then take the wash bucket and milk pail back to the house.

For a full list of the supplies I use and where to get them, see this post.

Morning milking is a balm to the soul. . I used to

You want to make real honest-to-goodness cheese at

“It isn’t the great big pleasures that count t

This time of year I worry about too much grass gro