You are here: Home / Archives for Pigs 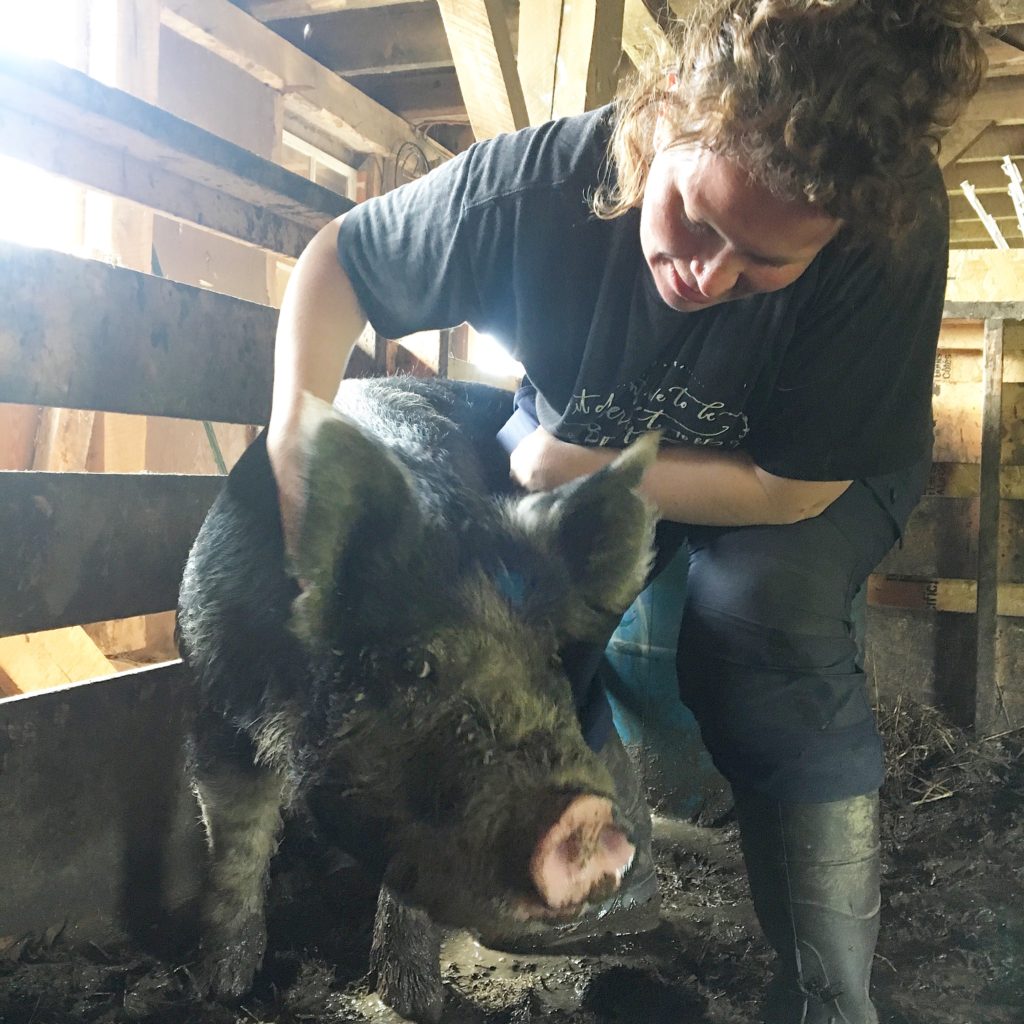 We got our first pigs last spring from a breeder just a few hours away from us.  We took the kids and the truck and a borrowed dog crate and brought home two uber-cute purebred Berkshire piglets, about 10 weeks old.  We named them Gertie (the gilt – a young female pig who’s never had piglets) and Hamilton (the barrow – a young male who’s been castrated).

We have loved having pigs on our farm.  They are wonderful converters of every spare ounce of nutrition from table scraps and pasta water to garden weeds and excess or past-prime garden produce.  They’ve made excellent compost for the garden and, since we butchered Hamilton early this spring, have also made excellent bacon.

Our plan from the get-go was to keep Gertie as a breeding sow.  Of course, we intended to breed her this winter so she would have piglets in the spring, but time got away from us and with so many other plates in the air, this one didn’t just get spun until now.  I’ve been tracking her cycle for a few months and so knew when to expect that she’d come in heat, so this week we bit the bullet and made it happen.

As is the case in every new endeavor you try – we learned a lot on our first go-round. Here are the top four things I learned with a hefty dose of “next time I’ll…”

I had totally assumed that semen was frozen and that it could be shipped and stored for months at time. Not so. As I was reading about and researching this whole process, I learned that most semen operations collect twice a week and will ship every day of the week.  They ship the semen overnight to your destination in a small cooler box with refrigeration packs. The temperature should be kept at an even 63 degrees. The semen is mixed with an extender – a solution that essentially feeds the sperm to keep them viable. It should be stored in a dark, cool place (but not a fridge or a freezer!) and gently turned twice a day to keep the extender and semen well mixed.

A pig will come in heat every 18-28 days, but usually every 21. Every pig is different and Gertie is no exception.  She would come in heat every month, but her cycle wasn’t super regular; one month it would be 20 days, another 23. This month she was scheduled to come in heat on a Tuesday. There are several phases to a pig’s heat cycle. One day one, often referred to as pre-estrus, her vulva will be swollen and she may have some discharge. Two to three days after that, she will go into standing heat and be ready to be bred. You notice this when she stands still, often arching her back and perking her ears, when you put pressure on her back end (when a pig is not in heat, she will scurry away as quickly as possible). Standing heat indicates ovulation and is the ideal time to inseminate.

I expected Gertie to come into heat Tuesday, but only noticed slight swelling that evening.  I placed the order for semen the next morning, expecting that she would be in standing heat Thursday. The first dose should be administered 12 hours after you first notice standing heat. But when I checked her Wednesday afternoon, she was standing. This was earlier than anticipated and so I worried that I had waited too long to order the semen. It arrived the next morning around 9am and so I gathered the supplies and headed out, only to discover that she no longer seemed to be in standing heat!

Disappointed and distraught, I decided to feed her and let her settle for a couple hours.  I called and talked to my supplier and he walked me through a couple scenarios. From what I’d explained, he didn’t think that I’d missed her standing heat, but on the off-chance I had, he said, she would still be ovulating and I should try to get a dose in as soon as possible. I asked if he had any advice on how to do that since she was not standing still for me. “You’ll have to be inventive,” he said. “I’ve bred walking before, so it can be done. Maybe don’t have anyone filming you while you do it though,” he chuckled.

Boar spray is a spray full of boar pheromones that helps to stimulate and prepare the pig for insemination.  You can spray it just in front of her nose or on a rag that you hold in front of her and those pheromones will stimulate all kinds of appropriate responses to prepare her body for breeding – her back arches and her vulva softens and lubricates, making it easier to insert the breeding rod. She stands still as she would for a boar to mount and take care of business. Her uterus and cervix contract to pull the semen in and ensure successful insemination.

It’s not necessary, though. All these processes can and do happen naturally and instinctually even without a boar or pheromone spray. And so at the last minute, I talked myself out of it.  I don’t know why. Seems like such a silly thing to do.  I’m a beginner! I’ve never done this before! I should be using all the things to make this as successful as possible! And yet, I did not. I think it totally would have helped the standing heat issue Gertie had. I imagine she was still or could have still been in standing heat, but was nervous (understandably!) and wary. Her vulva was still swollen and so was certainly still showing signs of being in heat and she settled down, arching her back as I wiped her down to be sure she was clean – responding appropriately to stimuli.  I’m sure the boar spray would have helped and next time, I’m using it for sure.

3. See it done. In person, if possible. On YouTube if need be.

We meant all winter to make a visit to the pig farm where Gertie was born.  The owner there had promised to show us the ropes and give us a hands-on demonstration so we weren’t going into this adventure blind. But between work – hers and ours – and other time commitments – hers and ours – and sickness – hers and ours, it just didn’t happen.  This is part of the reason why we put off inseminating Gertie for so long.  We felt so unsure of the whole process.  But we knew we couldn’t wait any longer and when yet another attempt to schedule a visit fell through last week, I took to the inter-webs.

There’s really not a lot of information available about inseminating pigs. I was surprised. But I read all the information from five or six different semen suppliers (the most helpful resources by far) and I called the supplier I finally chose (based on the thoroughness of their Help section, actually) and asked them tons more questions.  They were so patient and helpful and walked me through the process and the timing over and over again. I also watched Kate‘s videos of her pig’s insemination. I’d been following her on IG for more than a year and fond her step-by step video so helpful.

Of course, the ideal would be to see the process in person and participate with a knowledgable mentor on hand to walk you through step-by-step and answer questions in real time. But we don’t all have access to a pig breeder and YouTube is an excellent resource. But by all means, seeing it done matters and it made such a big difference in my confidence level.

It’s hard to push through the steep learning curve of any new adventure. Courage means being afraid or anxious or nervous and just doing it anyway. Confidence comes from doing it again with more skill each time. When you artificially inseminate a pig, you will administer at least two doses, possibly three.  Before the first, you’ll be a beginner with zero practical knowledge, but by the end of the third dose, you’ll be well on your way to amateur status. Hard things get easier with practice, and each time you practice, you’ll get a little better and learn a little more.

I learned a lot this go through and am crossing my fingers that all went well. A pig’s gestation is 3 months, 3 weeks, 3 days so if the insemination was successful, we’ll have a robust litter of piglets right around August 31st. Cheers to being gutsy enough to keep tryingnew things!